The Qt Quick sprite engine is a stochastic state machine combined with the ability to chop up images containing multiple frames of an animation.

You can affect the currently playing sprite in two ways. You can arbitrarily force it to immediately start playing any sprite, or you can tell it to gradually transition to a given sprite. If you instruct it to gradually transition, then it will reach the target sprite by going through valid state transitions using the fewest number of intervening sprites (but ignoring relative weightings). This allows you to easily insert a transitional animation between two different sprites. 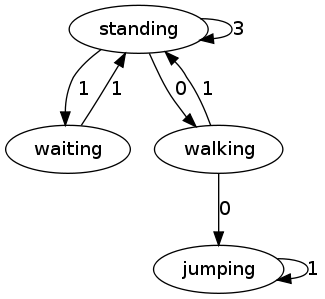 The file formats accepted by the sprite engine are the same as the file formats accepted by other QML types, such as Image. In order to animate the image, however, the sprite engine requires the image file to contain all of the frames of the animation. They should be arranged in a contiguous line, which may wrap from the right edge of the file to a lower row starting from the left edge of the file (and which is placed directly below the previous row).

As an example, take the above image. For now, just consider the black numbers, and assume the squares are 40x40 pixels. Normally, the image is read from the top-left corner. If you specified the frame size as 40x40 pixels, and a frame count of 8, then it would read in the frames as they are numbered. The frame in the top left would be the first frame, the frame in the top right would be the fifth frame, and then it would wrap to the next row (at pixel location 0,40 in the file) to read the sixth frame. It would stop reading after the frame marked 8, and if there was any image data in the square below frame four then it would not be included in the animation.

It is possible to load animations from an arbitrary offset, but they will still follow the same pattern. Consider now the red numbers. If we specify that the animation begins at pixel location 120,0, with a frame count of 5 and the same frame size as before, then it will load the frames as they are numbered in red. The first 120x40 of the image will not be used, as it starts reading 40x40 blocks from the location of 120,0. When it reaches the end of the file at 160,0, it then starts to read the next row from 0,40.

The blue numbers show the frame numbers if you tried to load two frames of that size, starting from 40,40. Note that it is possible to load multiple sprites from one image file. The red, blue and black numbers can all be loaded as separate animations to the same sprite engine. The following code loads the animations as per the image. It also specifies that animations are to be played at 20 frames per second.

Frames within one animation must be the same size. However, multiple animations within the same file do not. Sprites without a frameCount specified assume that they take the entire file, and you must specify the frame size. Sprites without a frame size assume that they are square and take the entire file without wrapping, and you must specify a frame count.

The sprite engine internally copies and cuts up images to fit in an easier-to-read internal format, which leads to some graphics memory limitations. Because it requires all the sprites for a single engine to be in the same texture, attempting to load many different animations can run into texture memory limits on embedded devices. In these situations, a warning will be output to the console containing the maximum texture size.

There are several tools to help turn a set of images into sprite sheets. Here are some examples:

Sprites for the sprite engine can be defined using the Sprite type. This type includes the input parameters, as well as the length of the animation and weighted transitions to other animations. It is purely a data class, and does not render anything.

Additionally, ImageParticle can use Sprite types to define sprites for each particle. This is again a single sprite engine per type. This works similarly to SpriteSequence, but it also has the parameterized variability provided by the ImageParticle type.

For use-cases which do not need to transition between animations, consider the AnimatedSprite type. This type displays sprite animations with the same input format, but only one at a time. It also provides more fine-grained manual control, as there is no sprite engine managing the timing and transitions behind the scenes.