The Felgo Games are available with the following import statement in your QML file:

This is a list of all the Felgo components grouped into functional groups.

Note: You can quickly test and explore most of the components in the Examples Section of the Felgo Sample Launcher. 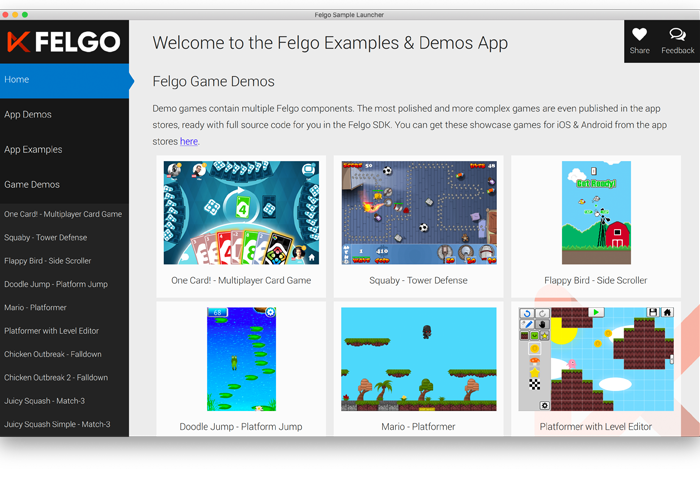 Felgo Plugins for Games (and Apps)

Note: For testing the plugins on mobile and source code examples, see the Felgo Plugin Demo. When you develop your own game and want to add plugins to it, a Felgo license is required.

Felgo Game Network components for using leaderboards, achievements and challenges in your game.

Note: The GameNetworkView is deprecated and will no longer receive updates and fixes. Instead, please use the SocialView and Felgo Social Components below.

Default UI for FelgoGameNetwork and FelgoMultiplayer features like user profiles, leaderboard or chat.

These components every game will contain. Most important are GameWindow, Scene, EntityBase and EntityManager.

The Context Components are global properties that are available in all QML files. They can be used to open native dialogs and browsers, network requests, dynamic QML component creation and provide system information.

These components are used for efficient rendering in games and to handle multiple screen sizes. Most important is MultiResolutionImage for handling different screen sizes and aspect ratios. And SpriteSequence or AnimatedSprite for animated sprites. For advanced and performance-improved animations, see TexturePackerAnimatedSprite and SpineSkeleton.

In addition to the above list, also these Qt Quick Components are useful.

These components are used for 3D rendering.

These components allow entity movement with a keyboard or a virtual controller for touchscreens.

In addition to the above list, also these Qt Quick Components are useful:

These components add physics behavior to a game. They can either be used for collision detection, or for moving entities based on physics. The physics engine used by Felgo is Box2D.

To create custom physics objects which use more than the default behavior of BoxCollider, CircleCollider or PolygonCollider, combinations of these Fixture types can be used inside a ColliderBase object:

To link multiple physics objects together, the following types of joints can be used:

The above components will be used most of the time. These components are for advanced use:

These components allow to play audio and video files.

In addition to the above list, also these Qt Quick Components are useful:

JsonListModel allows to transform your JSON data into a QML ListModel for usage with e.g. an AppListView.

SortFilterProxyModel for Sorting and Filtering

The AI components move entities towards a target point, with a constant velocity or along a path.

The RUBE components allow loading of levels and Box2D objects created with RUBE, which stands for Really Useful Box2D Editor. You can use RUBE to create side scrollers like Badland or Jetpack Joyride, platformers like Super Mario, and other physics-based games.

The QML Native Code Components allow to interact with the native platform.

You can show native views as part of your QML scene. You can also call native APIs directly from QML.

See here for a full list of all QML components.