Felgo Games provide a specialized set of QML components for building 2D games on top of Qt 5 for multiple platforms, with the same source code. They are part of the Felgo SDK.

QML stands for "Qt Markup Language" and is a declarative language designed to describe the user interface of a program: both what it looks like, and how it behaves. In QML, a user interface is specified as a tree of objects with properties. This tree is also often referred to as Scene Graph, because when the parent item moves all children will follow. JavaScript is used as a scripting language in QML. In this section we will cover the basics of QML and its advantages by an example.

As code speaks more than 1000 words, here is a QML example implementing the following:

How many lines of code would it take you to develop this application with the same functionality in another programming language? With QML, it is just 30 lines, excluding the comments and empty lines:

The Felgo Sample Launcher allows you to quickly test and run all the open-source examples and demo games available with the Felgo SDK, from a single desktop application. 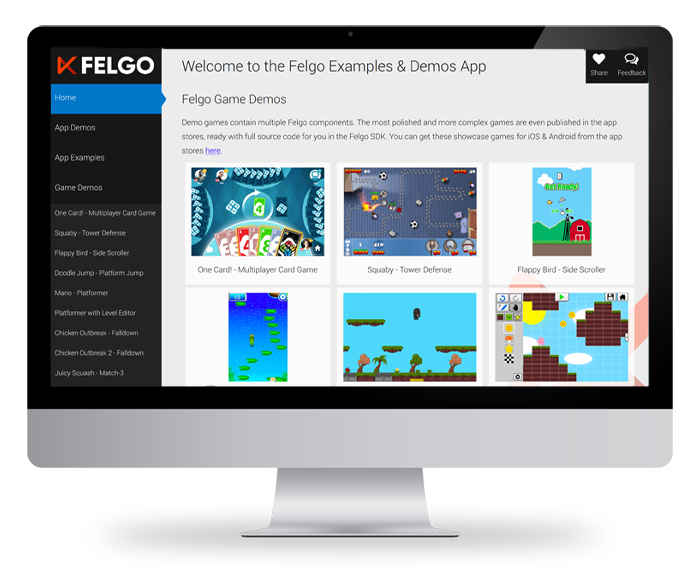 Felgo, a Qt Technology Partner of The Qt Company, enhances the Qt 5 framework with many components and its gaming API used in hundreds of games.

Existing Qt 5 games can benefit from this gaming API and Felgo plugins, because they work as an extension of the Qt framework and work together with existing projects. As a Qt developer, you get the following benefits by using Felgo:

And of course as part of Felgo you can use leading Qt plugins that enable you to: