The AdMobRewardedVideo item allows monetizing your app with rewarded video ads on Android and iOS. More...

Rewarded videos are skippable full-screen videos shown to the user. 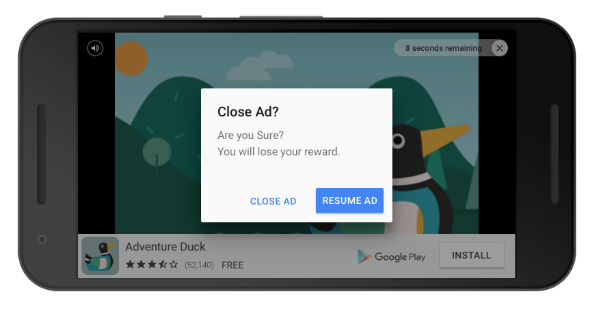 You can reward the user for watching a full video until the end. You can choose how this reward looks like: give away some virtual currency, virtual items or unlock features within your app or game are popular examples.

Note: In contrast to interstitials, it is not possible to have more than one AdmobRewardedVideo item in your code. This restriction comes from the native AdMob SDK for iOS and Android.

Here is an example how you can reward the user with virtual currency after he watched a rewarded video ad:

Hint: We have this mechanism in place in the popular One Card game - you can use its full source code and copy it to your app. This also includes a real in-app purchase implementation with our free in-app purchase plugin.

Rewarded ads are the preferred way to use mobile ads these days, so we highly recommend to use this feature in your apps. The perfect time to show a rewarded ad is when a user navigates between pages of your app. For example after he finished a game or after he had a success moment like completing a level. You could motivate the user even more to watch an ad by giving extra benefits after such a success moment. This helps you to earn money, while on the other hand giving a benefit to the user - a win-win situation.

For more information on the other available ad types and how to add this component to your app, see the AdMob Plugin.

Provide your Ad unit ID retrieved from the AdMob console in the format ca-app-pub-xxxxxxxxxxxxxxxx/xxxxxxxxxx here. If you do not have an AdMob account yet, you can create a new one at http://www.google.com/ads/admob/. Once you are logged in, you can acquire a new Ad unit ID by creating a new app and defining a new ad unit.


Set this property to true if you want to indicate that you want Google to treat your content as child-directed. Google will then take steps to disable IBA and remarketing ads for your ads.


Set this property to true if you have opted your app in to Google Play's Designed for Families program.

Note: This property is only applicable for Android. You need to ensure ads comply with the Designed for Families program requirements and ad policies.


Set this property to true to automatically request ad tracking authorization on iOS.

The item will ask the user for permission to use the advertising identifier (IDFA) before showing any ad. If the user accepts, ads can be attribute to them better.

The item still shows the ad even if the user denies the request.

Note: This property only has an effect on iOS versions 14 and above. Earlier iOS versions and Android do not require the authorization.

To support the ad tracking authorization, adapt your ios/Project-Info.plist. Add the NSUserTrackingUsageDescription key with a description of usage. Example:

You can find more information here.

Note: This property only has an effect on iOS and is ignored on other platforms.

This property was introduced in Felgo 3.9.0.


Provide your device id as an array of string values here to receive test ads for the specific test devices.

Note: If you test your application with live ads frequently, Google might ban your account for fraud. Therefore if you are not able to provide the testDeviceIds and test with live ads instead.

You can find your testdeviceIds in the device log after you first run an your app with integrated AdMob plugin, search for "To get test ads on this device, call adRequest.addTestDevice".

This handler is called when a rewarded video is dismissed by the user, either while it was still playing or has already finished. If the user watched the video until the end, rewardedVideoRewarded will also be called.

Note: The corresponding handler is onRewardedVideoClosed.


This handler is called if a rewarded video can not be loaded, e.g. due to a network error.

Note: The corresponding handler is onRewardedVideoFailedToReceive.


This handler is called after the user clicked an ad while the video was playing and the app is going to be moved to the background to display the ad, e.g. in a browser.

Note: The corresponding handler is onRewardedVideoLeftApplication.


This handler is called when a rewarded video ad is displayed. At this point in time, the video might still be loading, rewardedVideoStarted will be emitted when it actually starts playing.

Note: The corresponding handler is onRewardedVideoOpened.


This handler is called after the loadRewardedVideo() request has finished and the rewarded video is ready to display.

Note: The corresponding handler is onRewardedVideoReceived.


This handler is called when the user finished watching the video and can be rewarded by the app.

Note: The corresponding handler is onRewardedVideoRewarded.


This handler is called when a rewarded video has started playing.

Note: The corresponding handler is onRewardedVideoStarted.

Call this method to start downloading a rewarded video ad in the background. When finished, the rewardedVideoReceived signal will be emitted.


This method displays a rewarded video ad that was previously requested via a call to the loadRewardedVideo() method.

For example, it can be called directly after rewardedVideoReceived is emitted: