Integrate with Parse Push to increase your users' engagement.

Push notifications are a direct channel to your app's users. Keep them happy and engaged with app updates, promotions, and more sent directly to their device.

Send notifications to all users, a targeted segment or an individual user, thanks to push channels it has never been easier to send push notifications.

Push Notifications are a great way to keep users engaged and inform users about updates in your app.

In comparison to local notifications push notifications are triggered from a server-side logic. To make things easier Parse provides a push backend for delivering notifications from a custom web-service or with the help of their Push Notification Dashboard.

Note: If you only need scheduled local notifications that don't require any external logic to be triggered have a look at our Notification Plugin.

Push notifications can either be sent to all registered devices or targeted by subscribing to "channels".

To use push notifications in your app add the following item to your QML code:

Note: You can retrieve the <PARSE-APP-ID> and <PARSE-CLIENT-ID> from your Parse Dashboard, for more information have a look at the section Parse Account.

You can disable all push notification channels independent from the channels property by setting the enabled property to false:

The data parameter is a map containing the JSON object content with all parameters of the push notification payload sent over Parse.

The signal is emitted in following cases:

For a full demo project please also have a look at our example on GitHub: https://github.com/FelgoSDK/PluginDemo

Note: You can retrieve the <PARSE-APPLICATION-ID> and <PARSE-REST-API-KEY> from your Parse Dashboard, for more information have a look at the section Parse Account.

You can define the text which should be shown within the notification in the alert block. The data block is provided within the Parse::notificationReceived handler.

There are also other Parse API SDKs which allow sending push notifications, you can have a closer look here: https://parse.com/docs/api_libraries

Note: You can also send test notifications when opening the Push panel within your app's Parse Dashboard: 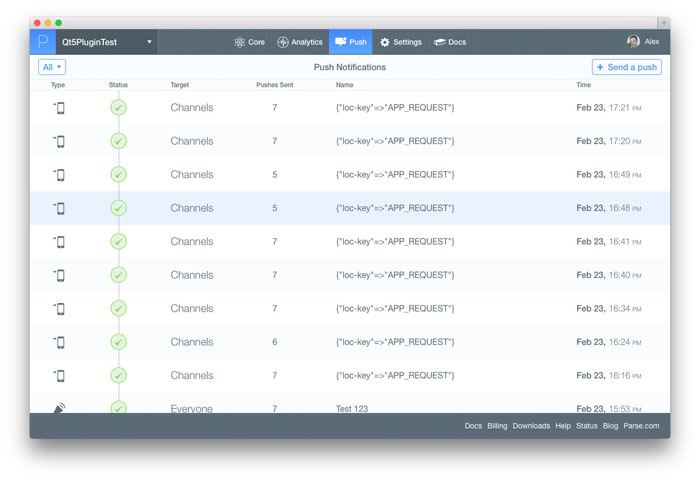 Beside sending simple text messages within the alert block you can also send a more advanced payload for the following use-cases:

Sending push notifications to a localized app often means that you have to keep track of the language which is installed on the users' devices and send the alert payload depending on that settings.

To make your life easier it's also possible to send predefined localization keys, which are then replaced with localized strings bundled within your app.

To send a push notification with a localized key use a payload like the following, adding the loc-key parameter to the alert JSON block:

Note: This approach is only suitable if all push notification texts are already defined at the time you're submitting your app to the app stores.

Navigating to a Specific Screen From Push Notifications

It's also possible to send additional key/values beside your alert payload. As an example you can send a screen code which you can navigate to when a user opens your app from a push notification. For this use case append additional keys to the JSON payload. The following example defines an additional key named screen:

In you QML code you can then read the key by referencing it in the data parameter:

Note: Please keep in mind that the payload's length for push notifications is restricted by Apple's and Google's push notification payload. Therefore make sure that you keep your information reasonable small and postpone loading additional data after your user opens your app again.

If an app relies on displaying up-to-date information every time the app starts, it can be useful to prepare and cache new content for the user even while the app is not running in the foreground. The Parse Plugin makes tasks like this really easy.

It enables you to download string data such as JSON or XML, cache it in the background and then process it as soon as the user opens your app again.

The following properties and signals can be used for that:

In this example, background messages are printed to the console. Up to 3 messages at a time will be stored.

After you have added the required properties to your QML code you can test it by sending a push notification that contains a content-available key with an integer value of 1, like the message below:

Note: Make sure you have set up your Parse Account properly and insert your Parse keys into the message below.

For example, the following push notification

and the following URL in your QML

will result in the URL http://www.felgo.com/.

How to Add a Felgo Plugin to your App or Game

When you create a new project, you can choose to add example plugin integrations as well. Open Qt Creator and choose “File / New File or Project”, then choose Single-Page Application in the Felgo Apps section or any other wizard. For Felgo Games, you can also find an own Game with Plugins project template as an own wizard.

Then select the platforms you want to run your application on. The plugins are available for both iOS & Android. There is a fallback functionality in place on Desktop platforms so your project still works when you call methods of the plugins. This allows you to do the main development on your PC, and for testing the plugin functionality you can run the project on iOS and Android.

After the Kit Selection, you can choose which of the plugins you’d like to add to your project:

Then complete the wizard, your project is now set up with all the correct plugin dependencies for Android & iOS automatically. This includes:

Note: Additional integration steps are still required for most plugins, for example to add the actual plugin libraries for iOS to your project. Please have a look at the integration steps described in the documentation for each of the used plugins.

If you have an existing Felgo application, follow these steps to include a plugin to your app or game:

In Qt Creator, select “File / New File or Project” and choose either Felgo Games or Felgo Apps from Files and Classes. Then select Felgo Plugin and press Choose.

You can now select the plugin you want to add:

The plugin item, which contains the chosen plugin and a short usage example, is now added to your project. To use the item in your project, simply perform these steps:

Note: If you have an existing Qt application, you can also add Felgo Plugins to your app! See here how to do this.

Activating Plugins with a License Key

You can test all plugins as soon as the required integration steps and plugin configuration are completed.

However, the plugins are only available as Trial Versions if they are not activated with a valid license. When you are using unlicensed plugins, a dialog is shown and a watermark overlays your application to notify you about the testing state of the plugin.

All monetization plugins are free to use in all licenses, other plugins are only fully usable if you have purchased the Startup or Business license. To activate plugins and enable their full functionality it is required to create a license key. You can create such a key for your application using the license creation page.

This is how it works:

To use the Parse plugin you need to add the platform-specific native libraries to your project, described here:

Add the following lines of code to your .pro file:

You finally need to set up a Parse user account at https://www.parse.com. Then open your Parse dashboard and add a new app. There you can also find your application id and client key in the app's settings.

To receive push notifications on iOS you also have to create a new developer and distribution push certificate (with a push-enabled iOS app id) at https://developer.apple.com/account/ios/certificate/certificateList.action and upload them to the app's push settings: 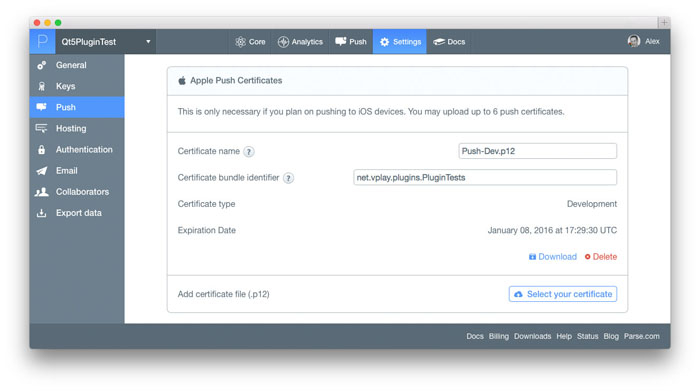 Note: Other SDK versions higher than the stated ones might also be working but are not actively tested as of now.