The QDockWidget class provides a widget that can be docked inside a QMainWindow or floated as a top-level window on the desktop. More...

The QDockWidget class provides a widget that can be docked inside a QMainWindow or floated as a top-level window on the desktop.

QDockWidget provides the concept of dock widgets, also know as tool palettes or utility windows. Dock windows are secondary windows placed in the dock widget area around the central widget in a QMainWindow. 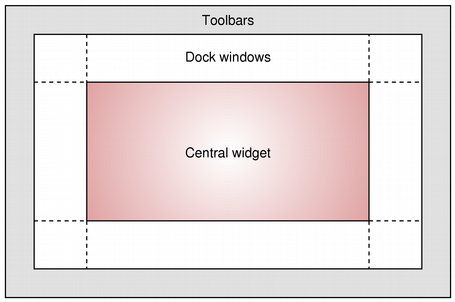 Dock windows can be moved inside their current area, moved into new areas and floated (e.g., undocked) by the end-user. The QDockWidget API allows the programmer to restrict the dock widgets ability to move, float and close, as well as the areas in which they can be placed.

A QDockWidget consists of a title bar and the content area. The title bar displays the dock widgets window title, a float button and a close button. Depending on the state of the QDockWidget, the float and close buttons may be either disabled or not shown at all.

The visual appearance of the title bar and buttons is dependent on the style in use.

A QDockWidget acts as a wrapper for its child widget, set with setWidget(). Custom size hints, minimum and maximum sizes and size policies should be implemented in the child widget. QDockWidget will respect them, adjusting its own constraints to include the frame and title. Size constraints should not be set on the QDockWidget itself, because they change depending on whether it is docked; a docked QDockWidget has no frame and a smaller title bar.

areas where the dock widget may be placed

This property holds whether the dock widget is movable, closable, and floatable

This property holds whether the dock widget is floating

A floating dock widget is presented to the user as an independent window "on top" of its parent QMainWindow, instead of being docked in the QMainWindow.

By default, this property is true.

When this property changes, the topLevelChanged() signal is emitted.

By default, this property contains an empty string.

Constructs a QDockWidget with parent parent and window flags flags. The dock widget will be placed in the left dock widget area.

The window title is set to title. This title is used when the QDockWidget is docked and undocked. It is also used in the context menu provided by QMainWindow.

Constructs a QDockWidget with parent parent and window flags flags. The dock widget will be placed in the left dock widget area.

This signal is emitted when the features property changes. The features parameter gives the new value of the property.

Initialize option with the values from this QDockWidget. This method is useful for subclasses when they need a QStyleOptionDockWidget, but don't want to fill in all the information themselves.

Returns true if this dock widget can be placed in the given area; otherwise returns false.

If a title bar widget is set, QDockWidget will not use native window decorations when it is floated.

Here are some tips for implementing custom title bars:

Using qobject_cast() as shown above, the title bar widget has full access to its parent QDockWidget. Hence it can perform such operations as docking and hiding in response to user actions.

Sets the widget for the dock widget to widget.

If the dock widget is visible when widget is added, you must show() it explicitly.

Note that you must add the layout of the widget before you call this function; if not, the widget will not be visible.

Returns a checkable action that can be used to show or close this dock widget.

The action's text is set to the dock widget's window title.

This signal is emitted when the floating property changes. The topLevel parameter is true if the dock widget is now floating; otherwise it is false.

This signal is emitted when the dock widget becomes visible (or invisible). This happens when the widget is hidden or shown, as well as when it is docked in a tabbed dock area and its tab becomes selected or unselected.

Returns the widget for the dock widget. This function returns zero if the widget has not been set.