The QTabletEvent class contains parameters that describe a Tablet event.

Tablet events are generated from tablet peripherals such as Wacom tablets and various other brands, and electromagnetic stylus devices included with some types of tablet computers. (It is not the same as QTouchEvent which a touchscreen generates, even when a passive stylus is used on a touchscreen.)

Tablet events are similar to mouse events; for example, the x(), y(), pos(), globalX(), globalY(), and globalPos() accessors provide the cursor position, and you can see which buttons() are pressed (pressing the stylus tip against the tablet surface is equivalent to a left mouse button). But tablet events also pass through some extra information that the tablet device driver provides; for example, you might want to do subpixel rendering with higher resolution coordinates (hiResGlobalX() and hiResGlobalY()), adjust color brightness based on the pressure() of the tool against the tablet surface, use different brushes depending on the type of tool in use (device()), modulate the brush shape in some way according to the X-axis and Y-axis tilt of the tool with respect to the tablet surface (xTilt() and yTilt()), and use a virtual eraser instead of a brush if the user switches to the other end of a double-ended stylus (pointerType()).

Every event contains an accept flag that indicates whether the receiver wants the event. You should call QTabletEvent::accept() if you handle the tablet event; otherwise it will be sent to the parent widget. The exception are TabletEnterProximity and TabletLeaveProximity events: these are only sent to QApplication and do not check whether or not they are accepted.

The QWidget::setEnabled() function can be used to enable or disable mouse, tablet and keyboard events for a widget.

The event handler QWidget::tabletEvent() receives TabletPress, TabletRelease and TabletMove events. Qt will first send a tablet event, then if it is not accepted by any widget, it will send a mouse event. This allows users of applications that are not designed for tablets to use a tablet like a mouse. However high-resolution drawing applications should handle the tablet events, because they can occur at a higher frequency, which is a benefit for smooth and accurate drawing. If the tablet events are rejected, the synthetic mouse events may be compressed for efficiency.

New in Qt 5.4: QTabletEvent includes all information available from the device, including QTabletEvent::buttons(). Previously it was not possible to accept all tablet events and also know which stylus buttons were pressed.

If the tablet is configured in xorg.conf to use the Wacom driver, there will be separate XInput "devices" for the stylus, eraser, and (optionally) cursor and touchpad. Qt recognizes these by their names. Otherwise, if the tablet is configured to use the evdev driver, there will be only one device and applications may not be able to distinguish the stylus from the eraser.

Tablet support currently requires the WACOM windows driver providing the DLL wintab32.dll to be installed. It is contained in older packages, for example pentablet_5.3.5-3.exe.

This enum defines what type of point is generating the event.

This enum defines what type of device is generating the event.

This enum was introduced or modified in Qt 4.1.

Construct a tablet event of the given type.

The pos parameter indicates where the event occurred in the widget; globalPos is the corresponding position in absolute coordinates.

pressure contains the pressure exerted on the device.

pointerType describes the type of pen that is being used.

xTilt and yTilt contain the device's degree of tilt from the x and y axes respectively.

The uniqueID parameter contains the unique ID for the current device.

The z parameter contains the coordinate of the device on the tablet, this is usually given by a wheel on 4D mouse. If the device does not support a Z-axis, pass zero here.

The button that caused the event is given as a value from the Qt::MouseButton enum. If the event type is not TabletPress or TabletRelease, the appropriate button for this event is Qt::NoButton.

buttons is the state of all buttons at the time of the event.

Returns the button that caused the event.

Returns the type of device that generated the event.

Returns the global position of the device at the time of the event. This is important on asynchronous windows systems like X11; whenever you move your widgets around in response to mouse events, globalPos() can differ significantly from the current position QCursor::pos().

Returns the global position of the device at the time of the event. This is important on asynchronous windows systems like X11; whenever you move your widgets around in response to mouse events, globalPosF() can differ significantly from the current position QCursor::pos().

Returns the global x position of the mouse pointer at the time of the event.

Returns the global y position of the tablet device at the time of the event.

The high precision coordinates delivered from the tablet expressed. Sub pixeling information is in the fractional part of the QPointF.

The high precision x position of the tablet device.

The high precision y position of the tablet device.

Returns the type of point that generated the event.

Returns the position of the device, relative to the widget that received the event.

If you move widgets around in response to mouse events, use globalPos() instead of this function.

Returns the position of the device, relative to the widget that received the event.

If you move widgets around in response to mouse events, use globalPosF() instead of this function.

Returns the rotation of the current tool in degrees, where zero means the tip of the stylus is pointing towards the top of the tablet, a positive value means it's turned to the right, and a negative value means it's turned to the left. This can be given by a 4D Mouse or a rotation-capable stylus (such as the Wacom Art Pen or the Apple Pencil). If the device does not support rotation, this value is always 0.0.

Returns a unique ID for the current device, making it possible to differentiate between multiple devices being used at the same time on the tablet.

Support of this feature is dependent on the tablet.

Values for the same device may vary from OS to OS.

Later versions of the Wacom driver for Linux will now report the ID information. If you have a tablet that supports unique ID and are not getting the information on Linux, consider upgrading your driver.

As of Qt 4.2, the unique ID is the same regardless of the orientation of the pen. Earlier versions would report a different value when using the eraser-end versus the pen-end of the stylus on some OS's.

Returns the x position of the device, relative to the widget that received the event.

Returns the angle between the device (a pen, for example) and the perpendicular in the direction of the x axis. Positive values are towards the tablet's physical right. The angle is in the range -60 to +60 degrees. 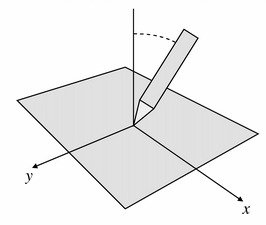 Returns the y position of the device, relative to the widget that received the event.

Returns the angle between the device (a pen, for example) and the perpendicular in the direction of the y axis. Positive values are towards the bottom of the tablet. The angle is within the range -60 to +60 degrees.

Returns the z position of the device. Typically this is represented by a wheel on a 4D Mouse. If the device does not support a Z-axis, this value is always zero. This is not the same as pressure.