How to make a game like Pong with Felgo - GameWindow, Scenes and Physical Worlds

When finished the last step, the main.qml file is opened and you can run the application. If you do not see the Hello World screen or any other errors occur you should go through the last steps until the example works before you continue. You can remove the Scene and all its child objects. Only the GameWindow should remain. In debug mode on desktops, you can see a FPS display in the left bottom corner of the window which shows you the frame rate. It won't be displayed in release mode when building with the build server. If still needed for testing, you can enable it also in release mode with

Presenting game content is similar to theater. The view and everything which can be seen is presented in the Scene. You can change the Scene and everything you see in your view will change automatically. In Felgo everything can be split into different scenes. Each window can have several scenes. Only one active at the time. You could have one Scene for the intro, the main menu, for each submenu, the credit screen or the actual game. Therefore, you can add a new Scene using the context menu in your qml directory for creating a new qml file called VPongScene. 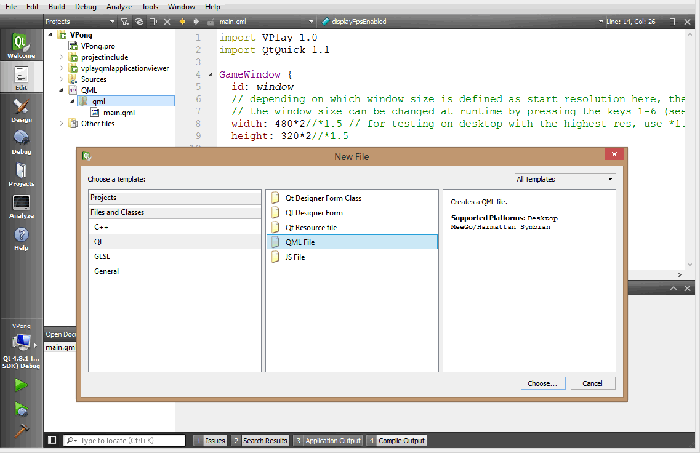 Remove the Rectangle created in the VPongScene.qml and replace it with the Scene item seen below. The Scene has a logical width and height which should be independent of the actual size of the display which is store in the GameWindow. This is important if you want to create a game for different devices using different display sizes. Very common size would be a size of 480x320. For an explanation on how you can support multiple screens and resolutions see How to create mobile games for different screen sizes and resolutions

In this game you will use the Felgo PhysicsWorld to simulate the game world. Therefore, the whole game world, placed in this Scene is driven by physics. This means a PhysicsWorld item needs to be added in the Scene.qml which allows collision detection and more.