Qt Linguist is a tool for adding translations to Qt applications. Once you have installed Qt, you can start Qt Linguist in the same way as any other application on the development host.

The Qt Linguist main window contains a menu bar and the following views: 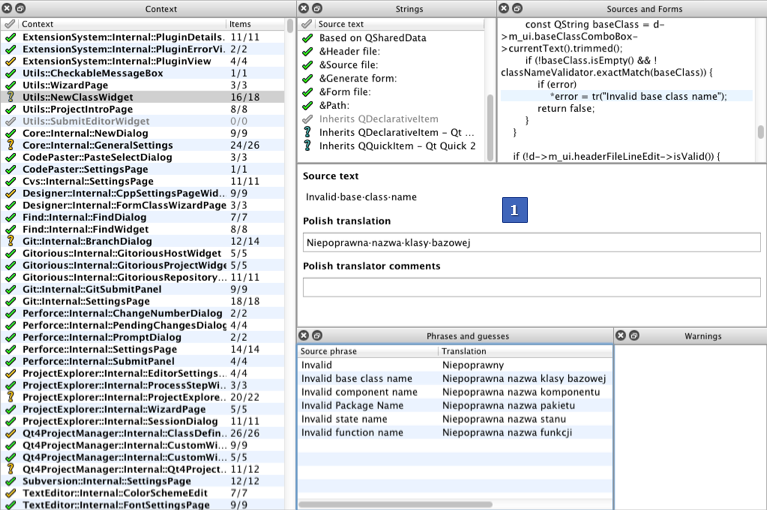 The translation area (1) is always visible. To show or hide the other views, select View > Views, or use the keyboard shortcuts listed above. You can drag the views by their title bars and arrange them around the translation area or even outside the main window.

You open translation source (TS) files in Qt Linguist for translation. TS files are human-readable XML files containing source phrases and their translations. TS files are usually created and updated by lupdate. If you do not have a TS file, see Release Manager to learn how to generate one.

You can use Qt Linguist also to translate files in the international XML Localization Interchange File Format (XLIFF) that are generated by other programs. However, for standard Qt projects, only the TS file format is used. The minimum supported version for XLIFF format files is 1.1.

Qt Linguist displays the target language in the translation area, and adapts the number of input fields for plural forms accordingly. When you open several TS files to translate simultaneously, the Translator and Translator comment fields are displayed for each language. For more information about setting the location information, see Changing the Target Locale.

If the developer provides a disambiguating comment, it is displayed in the Developer comments field.

(Accepted/Warnings). Then select the next context and continue.

To view the number of words and characters in the source text and in the translated text, select View > Statistics.

Leaving a Translation for Later

Phrases That Require Multiple Translations Depending on Context

If a phrase occurs more than once in a particular context it is shown only once in the Context view and the translation is applied to every occurrence within the context. If the same phrase needs to be translated differently within the same context, the developer must provide a distinguishing comment for each occurrence of the phrase. If such comments are used, the duplicate phrases appear in the Context view. The developer's comments appear in the translation area on a light blue background.

Alt key accelerators are used in menu selection and on buttons. The underlined character in a menu item or button label signifies that pressing the Alt key with the underlined character will perform the same action as clicking the menu item or pressing the button. For example, most applications have a File menu with the "F" in the word "File" underlined. In these applications the File menu can be invoked either by clicking the word "File" on the menu bar or by pressing Alt+F. To identify an accelerator key in the translation text ("File") precede it with an ampersand: &File. If a string to be translated has an ampersand in it, then the translation for that string should also have an ampersand in it, preferably in front of the same character.

Ctrl key accelerators can exist independently of any visual control. They are often used to invoke actions in menus that would otherwise require multiple keystrokes or mouse clicks. They may also be used to perform actions that do not appear in any menu or on any button. For example, most applications that have a File menu have a New submenu item in the File menu. The New item might appear as "New Ctrl+N" in the File menu, meaning the New menu can be invoked by simply pressing Ctrl+N, instead of either clicking File with the mouse and then clicking New with the mouse, or by entering Alt+F and N.

Each Ctrl key accelerator is shown in the Strings view as a separate string, for example Ctrl+Enter. Since the string does not have a context to give it meaning, such as the context of the phrase in which an Alt key accelerator appears, the translator must rely on the UI developer to include a disambiguation comment to explain the action the Ctrl key accelerator is meant to perform. This disambiguating comment (if provided by the developer) will appear under Developer comments in the translation area below the Source text field.

Warning: Do not translate the "Alt", "Ctrl" or "Shift" parts of the accelerators. Qt relies on these strings being there. For supported languages, Qt automatically translates these strings.

The use of numbered arguments is often accompanied by the use of plurals in the source text. In many languages, the form of the text will depend on the value shown, and more than one translation is required. If the developers have marked up the source text in correct way, fields for each of the possible plural forms will be available in the translation area. For more information, see Writing Source Code for Translation.

If this attempt to resolve the target language and country fails, the Translation File Settings window opens. 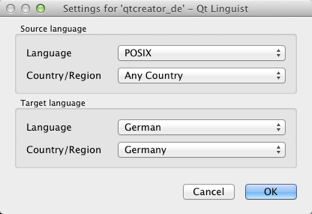 The Context view lists the contexts in which strings to be translated appear. The column labeled Context lists the context names in alphabetical order. Each context is the name of a subclass of QObject. There can also be a context for QObject itself, which contains strings passed to the static function QObject::tr(). There can also be an <unnamed context>, which contains strings that are not in a subclass of QObject.

The following icons indicate the current translation state for each context:

The following icons indicate the current translation state for each string:

Forms created by Qt Designer are stored in special UI files. Qt Linguist can make use of these UI files to show the translations done so far on the form itself if the UI files are available to it during the translation process.

To copy a translation from the Phrases and Guesses view to the translation area, double-click it or select it and press Enter. 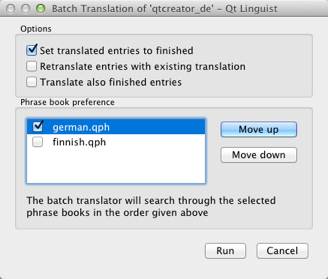 Phrase book files are human-readable XML files containing standard phrases and their translations. These files are created and updated by Qt Linguist and may be used by any number of projects and applications. 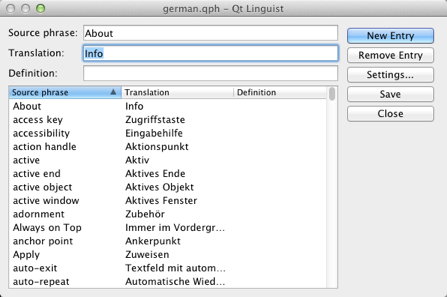 To add a new phrase, select New Entry (or press Alt+N) and type in a new source phrase, the translation, and an optinal definition. This is useful to distinguish different translations of the same source phrase.

To add the translation you are working on to the current phrase book, select Phrases > Add to Phrase Book or press Ctrl+T. If multiple phrase books are loaded, you have to select one.

If you detect an error in a phrase book entry that is shown in the Phrases and Guesses view, you can also edit it in place by right clicking on the entry, and selecting Edit. After fixing the error press Return to leave the editing mode.

To delete a phrase, select it in the Source phrase list, and then select Remove Entry.

To switch validation tests on or off, select Validation or use the toolbar buttons.

If you switch validation off and then switch it on later, Qt Linguist rechecks all phrases and marks any that fail validation.

If the translation you enter for the current string fails any of the active validation tests, the failures are listed in the Warnings view. The first of these failure messages is also shown in the status bar at the bottom of the main window.

Note: Only results of active validation tests are reported. 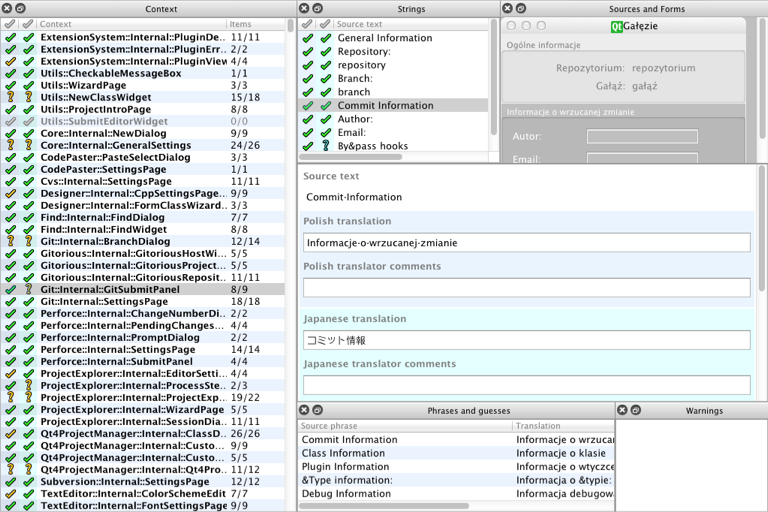 The translation area has text editing areas for both Polish and Japanese, and these are color-coded for easier separation. The Context view and the Strings view both have two status columns instead of one, color-coded with the same colors. The left-most column is related to the top-most language area (Polish above) in the translation area, and the right-most column is related to the bottom language area.