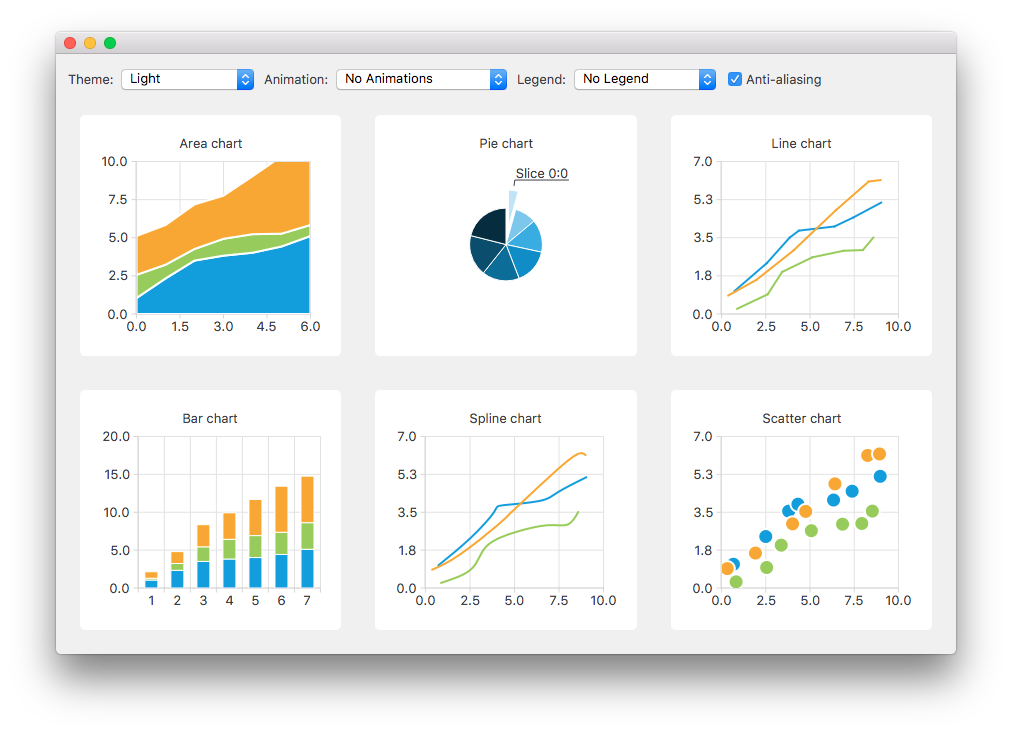 The QChart class manages the graphical representation of different types of series and other chart related objects, such as legend and axes. QChart is a QGraphicsWidget that can be shown in a QGraphicsScene. A simpler solution is to display a chart in a layout by using the convenience class QChartView instead of QChart. In QML, charts are displayed using the ChartView type.

The look and feel of charts can be customized by using themes, modifying colors and properties, hiding chart components, or animating charts.

Model mappers enable using a data model derived from the QAbstractItemModel class as a data source for a chart. Model mappers can be either horizontal or vertical.

You can combine different types of series in one chart. 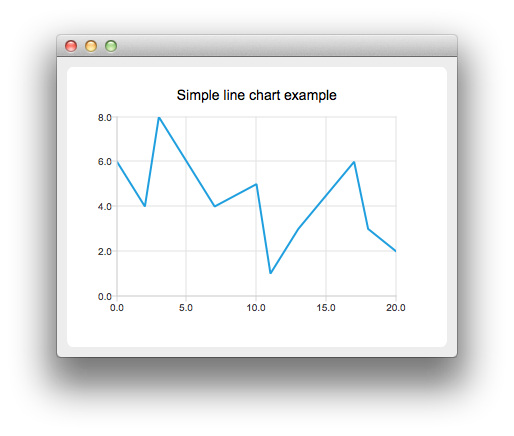 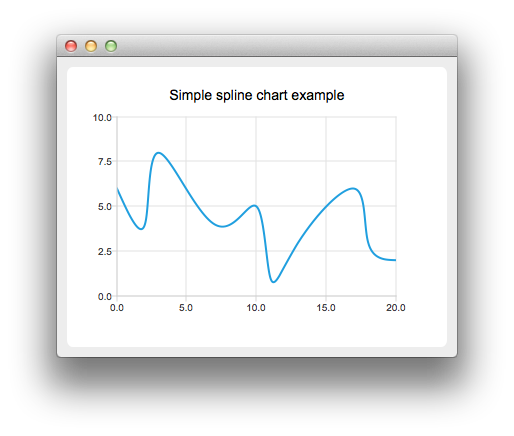 A line chart is implemented by using the QLineSeries class or the LineSeries QML type. 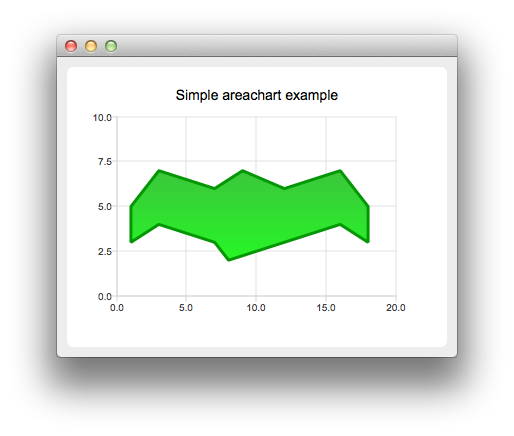 A bar chart presents data as horizontal or vertical bars that are grouped by category. The QBarSet class and the BarSet QML type represent one set of bars in a bar chart. The QAbstractBarSeries class is an abstract parent class for all bar series classes, and the AbstractBarSeries type is the parent type of bar series types. The series type determines how the data is presented. 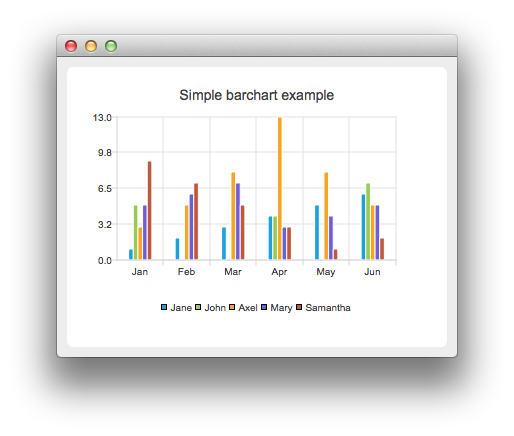 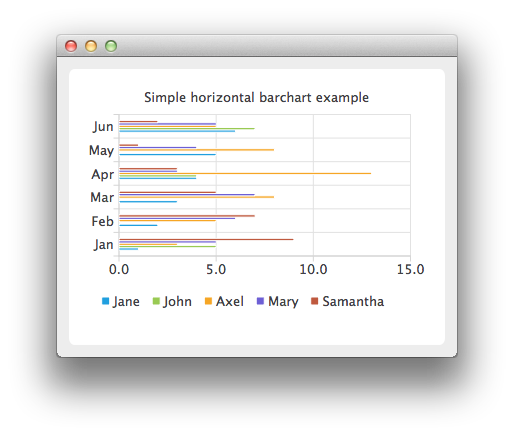 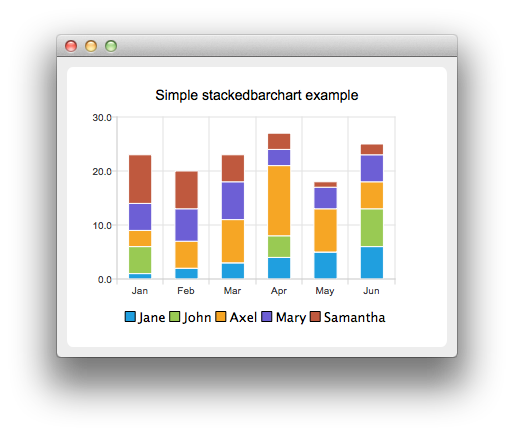 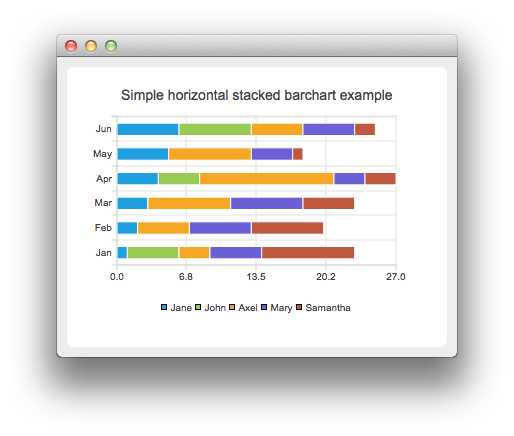 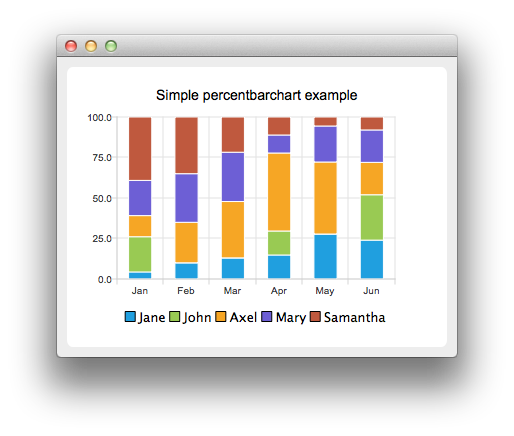 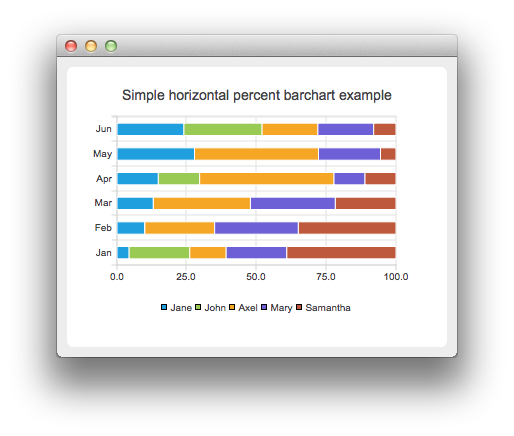 The pie can be turned into a donut by specifying a hole size between 0.0 and 1.0. 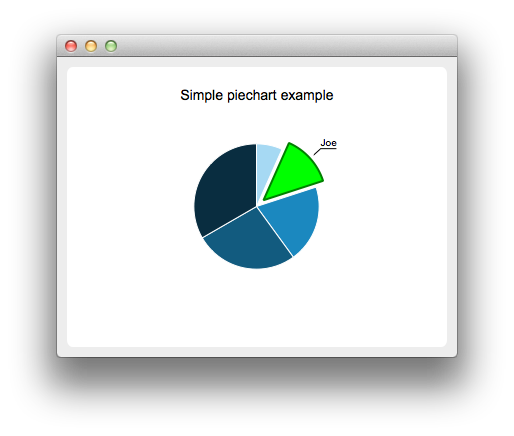 The box-and-whiskers charts present data as quartiles extended with whiskers that show the variability of the values. The items in box plot series are grouped by category, similarly to bar sets in bar series. For each box-and-whiskers item, the lower extreme, lower quartile, median, upper quartile, and upper extreme value are specified. 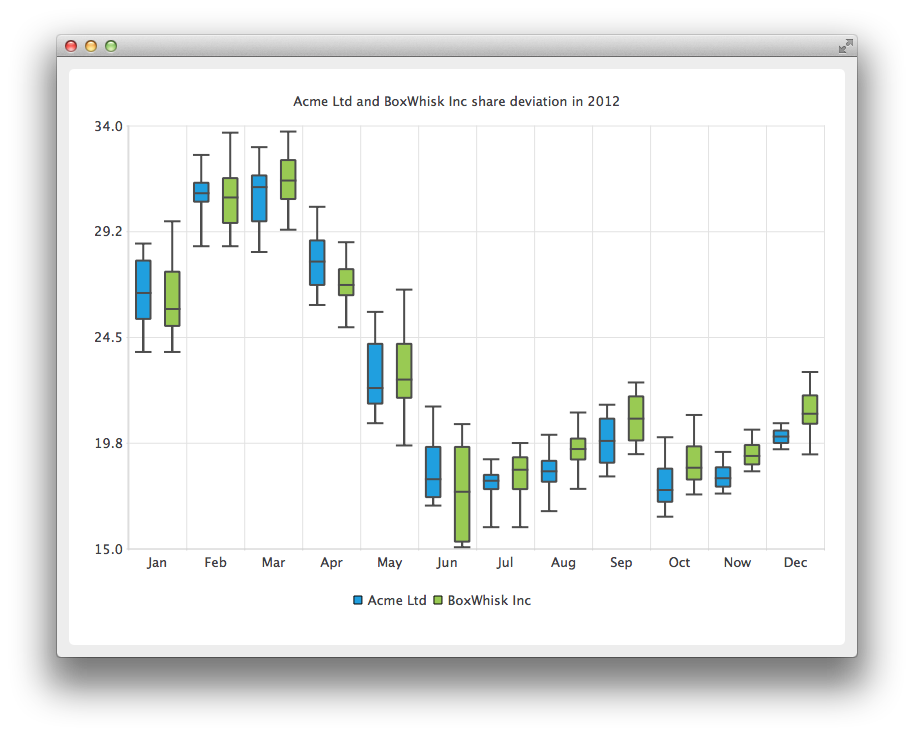 Candlestick charts presents a series of data shown as candlesticks. 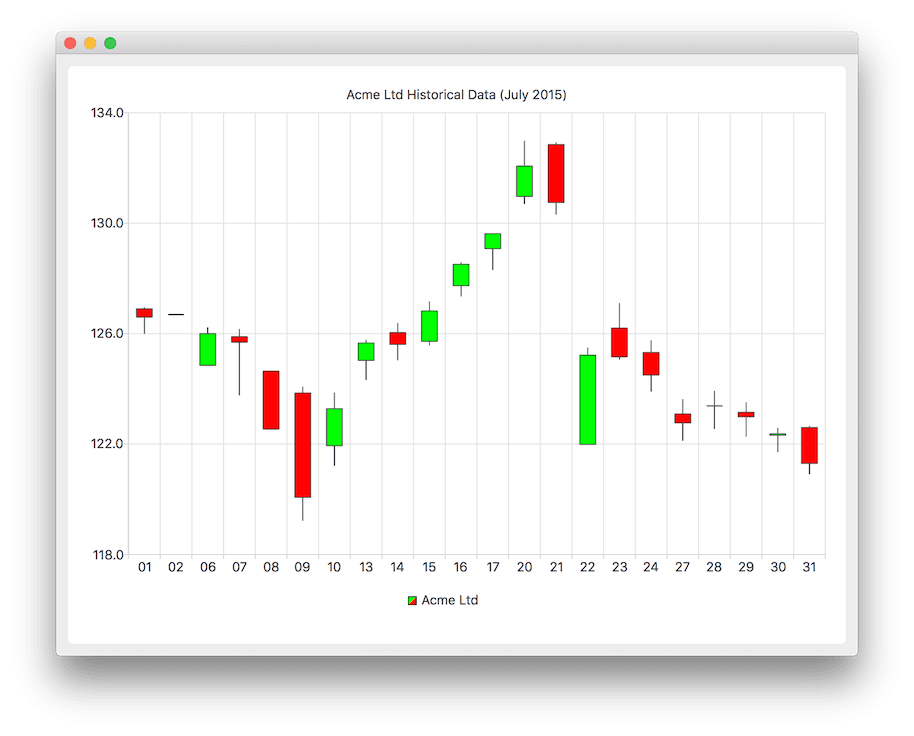 Polar charts present data in a circular graph, where the placement of data is based on the angle and distance from the center of the graph, the pole. 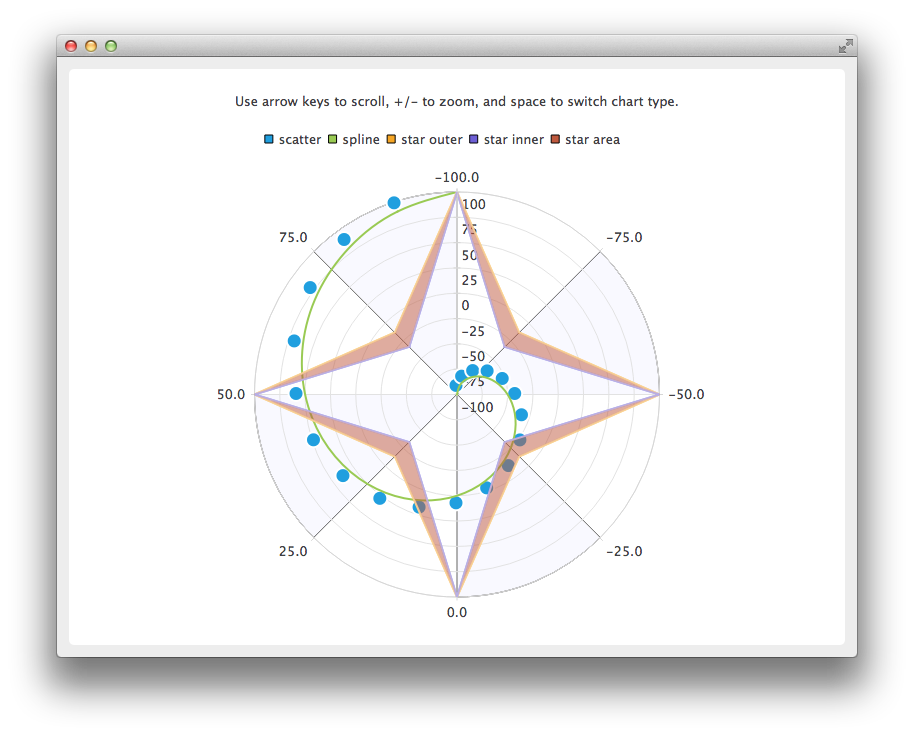 The QPolarChart class is a specialization of the QChart class. It supports line, spline, area, and scatter series, as well as all the axis types supported by them. The axis can be used either as a radial or an angular axis. In QML, the corresponding type is PolarChartView.

An axis can be set up to show a line with tick marks, grid lines, and shades. The values on the axis are drawn at the positions of tick marks. All axis types are specializations of the QAbstractAxis class or the AbstractAxis QML type.

A value axis adds real values to a chart's axis. It is implemented using the QValueAxis class or the ValueAxis QML type.

A category axis is implemented using the QCategoryAxis class or the CategoryAxis QML type. It has named ranges and adjustable range widths.

A date-time axis adds dates and times to a chart's axis. It is implemented using the QDateTimeAxis class or the DateTimeAxis QML type.

Multiple axes can be defined for one chart. The axes can be placed down, up, left, or right of the chart. Further, the axes can be of different types. However, mixing axis types that would result in different domains is not supported, such as specifying QValueAxis and QLogValueAxis on the same orientation.

A legend is a graphical object that displays the legend of a chart. Legend objects cannot be created or deleted, but they can be referenced via the QChart class or the ChartView QML type. The legend state is updated by QChart or ChartView when series change.

A legend can be positioned below or above the chart, as well as to the left or right of it. By default, the legend is attached to the chart view, but it can be detached to a separate graphics item that can be moved around freely.

It is possible to hide either individual markers from the legend or the whole legend.

In QML, legend markers can be modified by creating custom legends, as illustrated by the Qml Custom Legend example.

End users can interact with charts by dynamically adding values to them, drilling down into data, zooming into and out of charts, scrolling charts, and clicking items in charts or hovering the mouse over them.

It is possible to add data to charts dynamically and to make the chart view scroll automatically to display the new data.

Drilling Down into Data

Drilldown effects can be implemented to bar or pie charts, for example. When users select an item in the chart, a more detailed view of the item is displayed. This is implemented by deleting the first series and adding another one.

On touch devices, gestures can be used for panning and zooming.

You can connect slots to signals emitted when end users click items in charts or hover the mouse over them. This enables you to add elements, such as callouts, to the charts.

A theme is a built-in collection of UI style related settings applied to all the visual elements of a chart, such as colors, pens, brushes, and fonts of series, as well as axes, title, and legend.

The themes can be customized by changing the colors, pens, brushes, and fonts. New themes can be added by modifying the Qt Charts source code.

Note: Changing the theme will overwrite all customization previously applied to the series.