The Imagine Style is based on configurable image assets. More...

The Imagine style is based on image assets. The style comes with a default set of images, but the images can be easily changed by providing a directory with images using a predefined naming convention. 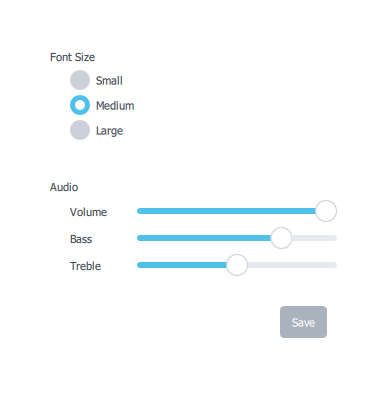 The Imagine style with the default images

To run an application with the Imagine style, see Using Styles in Qt Quick Controls 2.

The image files are named using the following convention:

The <control> and <element> sections are mandatory, but the <states> section is optional. For example, if a single file named "button-background.9.png" is provided for Button, it will be used for every state that Button supports. It is up to the developer to decide the set of states that they will provide images for. However, it is recommended to provide images for the most common control states where possible, such as disabled, pressed, etc. This will ensure that interactive controls visually behave as the end user would expect them to.

The following table lists which elements are supported for each control, along with the possible states for that element, and the file extension that it expects. An element is an image that represents a certain visual part of the control. For example, Button's "background" element represents its background.

The following table lists examples of assets (taken from the default Imagine style assets) for all controls. The list is not exhaustive, as not all elements need assets, but it can be used as a guide when creating your own assets.

1 A 1x1 image containing one color, stretched to fill the control.

The Imagine style uses 9-patch images in order to give designers control over how a particular element responds to being resized. Here is an example of a 9-patch image that represents a Button's background, alongside a magnified version (to make it easier to see the 9-patch lines):

The 9-patch lines must be black, and the remaining areas must be transparent or white:

The 9-patch lines on the top and left edges determine which parts of the image are stretched when it is resized.

Below are examples of the 9-patch image being resized to one and a half times its original size in various dimensions: 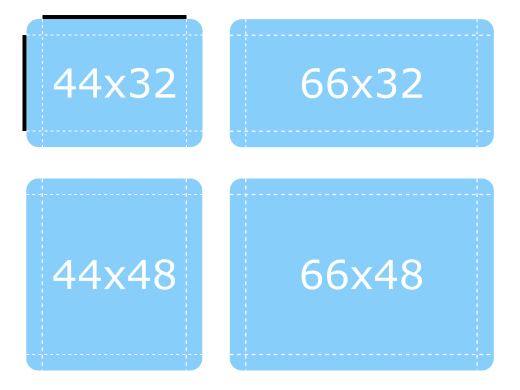 Notice how the the rounded corners keep their original size, as they are outside the range of the lines.

The 9-patch lines on the right and bottom edges determine how much space is available for the control's contentItem, which means it can also be thought of as controlling the padding. For a diagram that illustrates padding, see Control Layout.

Below are more examples of the 9-patch image being resized, but this time demonstrating how the padding 9-patch lines work. 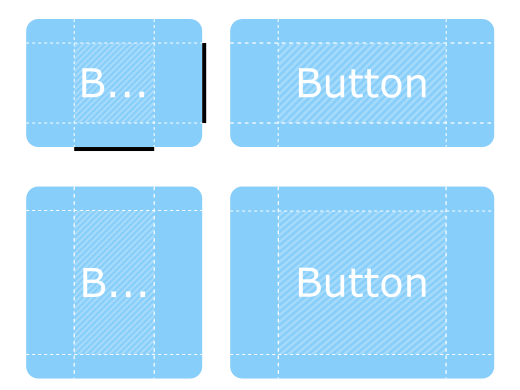 In some cases it is necessary for a control to have a drop shadow, for example. However, if we were to add a drop shadow to the button above, it would affect its size, which presents problems for both layouting and mouse/touch input boundaries.

Inset areas accounts for this by telling the control that a certain area of the 9-patch image should go outside of the control: 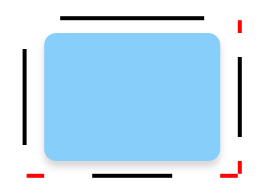 In the image below, the dashed line represents the button's clickable area, as well as the space that it will take up in a layout. The shadow is marked by the striped area behind it:

Various vector and bitmap editors can be used to create 9-patch images suitable for use with the Imagine style. The following sections briefly explain the export process for each editor, and the last section explains how to ensure the exported images are 9-patch-conformant.

The Inkscape 9-Patch Export Extension can be used to export assets with Inkscape.

Qt Quick Controls 2 also provides a plugin for Sketch that automatically fixes the thickness of the 9-patch lines after the assets are exported. To install this file, double-click on it. Once Sketch has confirmed that the 9-patch export plugin has been installed, the plugin will automatically process images when they are exported.

When exporting 9-patch images in several DPI variants (@2x, @3x, etc.), the 9-patch lines will typically be scaled up along with the image. There are several ways to fix this, but perhaps the simplest approach is to use ImageMagick's mogrify tool. The tool has a -shave feature that can be used to crop the image to reduce the thickness of the 9-patch lines:

Regular DPI images (those without the @Nx prefix) are not affected, so it is only necessary to run the command on images intended for high DPI displays.

The WebP and GIF animated image formats are supported by the Imagine style.

The Imagine style allows customizing the path that is used to do the image asset selection. The path can be specified for any window or item, and it automatically propagates to children in the same manner as fonts. In the following example, the window and all three radio buttons appear with dark image assets (files that are located in "qrc:/themes/dark").

In addition to specifying the path in QML, it is also possible to specify it via an environment variable or in a configuration file. Attributes specified in QML take precedence over all other methods.

This attached property holds the path to the image assets...